This year, D and I started a new Fall Tradition; we are going to try and hike all the waterfall trails in our city before the winter comes.

Fall is my favorite time to hike.  There are so many cool things that happen on Fall hikes, like today when we were walking, leaves started falling down all around us.  It was really pretty. And Hamilton has tons of cool waterfall trails.  This seems like the type of challenge we both really dig.

Our first hike was this morning to Tiffany Falls.  Its really close by.  And really pretty.

Can't wait for the next one! 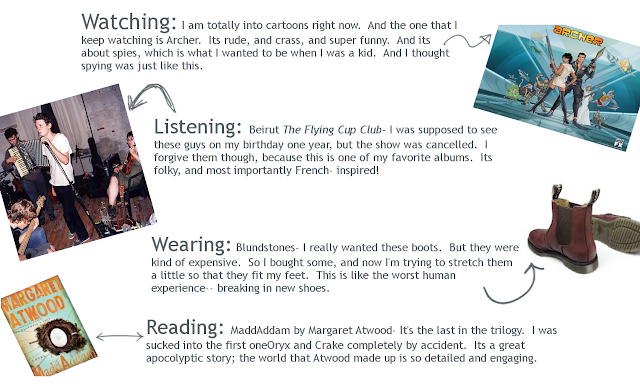 Email ThisBlogThis!Share to TwitterShare to FacebookShare to Pinterest
Labels: currently, nothing in particular

One this I've been doing a lot of lately is cross stitching.  I really like it.  Its relaxing; and its really versatile.  One thing I really love stitching is quotations.  I made these little things while watching TV.  It was really to put one of these together.  Pretty inexpensive too!  If you want to try and make your own, but have no idea how to cross stitch, I would have a look at this site. It even has pictures!

To make my quotations, I used 16 count fabric (makes the letters a little bigger), a size 5 sharp needle, and 2 of the 6 strands in a length of embroidery floss.

The other super helpful site was this one, the Cross Stitch Writing Tool.  All you have to do is type in your words, and it will chart out the letters for you!  You can save the file as a PDF or print it out!  I typed in my words, and chose a font, and I was ready to start stitching!

The arrows I just made up.  But there are thousands of free cross stitch patterns of arrows out there.  Just use a little imagination, and sew it up!

But seriously.  I'm really into the trend of running two words together that have no business jammed up against each other.  Frenemy?  Love it.  So, in that tradition, what should this be called?  Sentitment-artity?  Cross- stitchitments?

Email ThisBlogThis!Share to TwitterShare to FacebookShare to Pinterest
Labels: Crafts, do it yo'self, Foxy and Crafty, sewing, sewn

DIY: Pumkin Spice Latte (Its ok that I spelled it wrong, I probably made it wrong.)

I'm back!  Since I took such a long break, I thought I would apologize with this peace offering on how to make your own addicting beverage.

I know so many people that are addicted to the Pumpkin Spice Latte from Starbucks.  And that's cool.  I used to love them!  But lately, I've noticed that they have been making my sick; and my tummy can't handle too much of a beating anymore.

Also, for those who know me, I am incredibly cheap when it comes to spending money on things I'm pretty sure I can make myself.  For a fraction of the cost.  And its probably way healthier for me.  And tastes better.

ANYWAYS, I was searching for people that have tried to make the PSL for themselves, and they had some great ideas!  But they seemed really time consuming for a cup of coffee.

That's the pleasure of SBux, you don't have to do anything but hand over that money!  So here is a "latte" that is easy, fast, and cheap.


Steph's Pumkin Spice Latte (Its ok that I spelled it wrong, I probably made it wrong.)

1-2 tbsp honey (or you could use less agave syrup)
A mixture of cinnamon, ground clove and nutmeg that equals 1/4 tsp
About 1 cup of Soy milk, or any kind of milk
3/4 cup of strong coffee

Mix the honey (syrup) and spices together well.  Set aside while you assemble the rest of the team.

For the coffee part, I use my Keurig brewer.  (See I told you I wanted fast!)  To brew your coffee this way, use a dark roast (bold) coffee.  Brew one up using only 6 oz. of water.  That will make a nice strong cup for you latte.

For the milk part, pour your milk into a high walled bowl.  With a whisk, beat it until its frothy.  About 30 seconds.  Put the milk in the microwave for 30 seconds (until hot.) Take it out, give it another quick whisking, and assemble the knockoff latte:

Add 1-2 tsbp of honey to your cup, pour the hot coffee over the syrup and mix well.
Then pour the foamy milk into the coffee, and spoon some foam on top.

You could sprinkle some cinnamon on top if you are obsessed with making it look legit.  But then drink it immediately, because you've wasted enough time.

Or wait, and try to get some artsy pictures of it until the foam is gone:

Either way its delicious.  And I still have my 5 bucks.  And my Pumpkin Spice fix.  Enjoy!