Hi! I'm Stephanie Bass, I teach music, but before that I was a full-time musician.  I still make music, but now I also get to inspire other to make music.  It's a win-win, really.

My first EP is called "Songs for Black People;" it is a collection of acoustic jazz, blues and country inspired by my family's rich history as African-Americans in the American South. 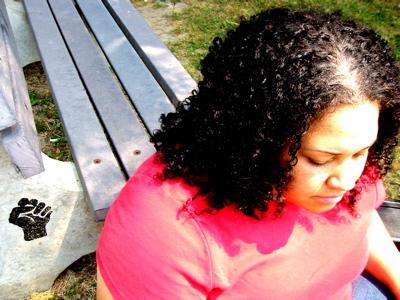 Here is a bio that a journalist wrote about me:
"Stephanie Bass lives music.  With three octaves of vocal power and a voice that’s rich and smooth, sometimes playful, sometimes sassy, she blends her talents into unique and wonderful classic jazz and blues.  She’s also skilled in the saxophone, guitar, piano and flute, and plays with a style that pulls you in and holds on until the last note’s done.
Stephanie began training as a vocalist and a musician over fifteen years ago.  She has taken instruction at both the Hamilton Conservatory for the Arts and the Royal Conservatory of Music in Toronto.  From there, she sang as a back-up vocalist for Shania Twain during the 1999 "Come On Over" Tour, and followed up with a variety of projects, including a performance on the soundtrack to the documentary "Hamilton: Where the Rubber Meets the Road;"(2002), several collaborations with local Hamilton musicians, and completing her first independent solo album "Songs For Black People."
Recently Stephanie’s completed her Master’s degree in History, an experience that took her in and through the 1960s, when Black classics were giving way to a new wave of Motown and Funk, two influences that gently resonate in every song she sings.
So have a listen, because with Stephanie you don’t just get a couple of sets.  You get equal parts humour, history and music:  a truly captivating performance."
Aw shucks.
Here are some songs:
Stephanie Bass · Summertime
Summertime by Stephanie Bass
Stephanie Bass · Nobody Knows You (When You're Down and Out)
Nobody Knows You (When You're Down and Out) by Stephanie Bass
Stephanie Bass · Walking Blues
Walking Blues by Stephanie Bass